7 Reasons You Should Find an Exercise Partner Right Now 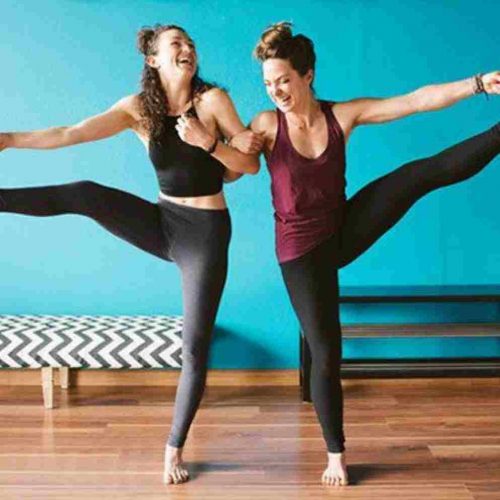 Exercising with a partner may inspire you to amp up the intensity of your workouts, too.

“Starting exercise is easy — the difficult part is continuing to exercise,” says Hirofumi Tanaka, PhD, a professor of kinesiology and health education at the University of Texas in Austin. “One of the predictors of success in terms of persistent exercise is the support of other people,” he says.

If you’re wondering where to work out with a friend in these COVID-19 times, consider doing your workout outdoors, which the Centers for Disease Control and Prevention (CDC) says is the safest choice. Meet a friend in the park for a strength-training workout or yoga session while staying six feet apart. If you or your workout partner is unvaccinated, the CDC recommends you wear masks.

The American Council on Exercise (ACE) suggests doing a video workout with a friend. Or you may be able to work out safely together indoors — there are many gyms and workout studios that require proof of vaccination in order to enter, which can protect against serious cases of COVID-19.

Ready to make your next sweat session way more social? Here are seven reasons why a workout buddy is just what the doctor ordered.

1. You’ll Be Even More Committed to Your Goals

Research has found that more than 50 percent of people who start exercising as a New Year’s resolution end up quitting by summer. But are you really going to skip out on your yoga class if a friend is saving a mat for you at the studio? Dr. Tanaka says that exercise partners provide great motivation to adhere to workout goals.

Indeed, other research has shown that working out with a friend (even virtually) pushes people to keep at it longer than they would on their own.

RELATED: 9 Tricks to Help You Start Working Out and Actually Stick to It

2. You’ll Be Less Likely to Get Bored and Quit

It’s easy to get caught in an exercise rut. But research from Scotland suggests that putting a friend into the mix can increase the amount of exercise you do. In a study published in April 2015 in the British Journal of Health Psychology, researchers found that the emotional support of someone you trust can serve as powerful reinforcement for fitness goals.

We often rely on family and friends to help us get through stressful periods in life. But a partner may also help alleviate stress in exercise environments. In a small study published November 2017 in the Journal of Osteopathic Medicine, group exercise participants reported a 26.2 percent reduction in perceived stress levels, which was more than study participants who exercised on their own. That’s in addition to the fact that exercise (with or without a friend) provides stress relief, pumps your body with feel-good endorphins, and improves your mood, according to the Mayo Clinic.

RELATED: Why Exercise and Sleep Are Your Ultimate Defense Against Stress

4. You’ll Push Yourself to Work Harder

In a study published in Sport, Exercise, and Performance Psychology, researchers reviewed data from high school track relays and found that inferior athletes made greater gains compared with the top ones when everyone had to perform as part of a team. The researchers were looking to test the Köhler effect, a psychological theory that says motivation increases among individuals working in groups in comparison with individuals working alone, according to the American Psychological Association.

Other research shows this effect has also been seen in adults doing strength exercises; study participants worked harder (holding a plank position for longer) when working out with a partner than they did when doing planks on their own.

5. It Might Help You Stick to Your Weight Loss Goals

According to previous research that focused on a group made up mostly of female African American participants, a successful group effort may help you lose more weight than when you go solo. Study participants who tried to lose weight with the help of family or friends who were also trying to lose weight (everyone participated in a program that involved counseling sessions, dietary changes, and a physical activity program) tended to be more successful than those doing the program on their own.

This may be more evidence that surrounding yourself with motivated people who are working toward achieving their goals can help you stick to yours.

RELATED: The Weight Loss Plans to Try and the Fad Diets to Skip if You Want to See Results

If you’re lifting weights, having a partner to spot you (which means they’re ready to assist you if you have trouble lifting heavy weight) can indeed be safer than doing it alone. “There is no question [it’s safer to work with a partner] if you’re inclined to work out with free weights,” says Tanaka. According to the National Academy of Sports Medicine, using a spotter when working with heavy weights maximizes safety and decreases the risk of injury.

There’s also safety in numbers when you’re out on a run: According to the Road Runners Club of America, running with others increases your safety.

7. You May Even Live a Few Years Longer

If your fitness routine is a social endeavor, it may contribute to your longevity, according to a large study that followed nearly 9,000 people over the course of 25 years. The findings, published in September 2018 in Mayo Clinic Proceedings, found that individuals who participated in group sports with more social interactions, like tennis and soccer, lived a few years longer on average than those who participated in solo fitness endeavors such as cycling or jogging.

Pro tip: Play tennis. Hitting the court was associated with nearly 10 years added to the participants’ life spans, compared with just an extra 1.5 years if they slogged it out at the gym.

Menu
We use cookies on our website to give you the most relevant experience by remembering your preferences and repeat visits. By clicking “Accept All”, you consent to the use of ALL the cookies. However, you may visit "Cookie Settings" to provide a controlled consent.
Cookie SettingsAccept All
Manage consent

This website uses cookies to improve your experience while you navigate through the website. Out of these, the cookies that are categorized as necessary are stored on your browser as they are essential for the working of basic functionalities of the website. We also use third-party cookies that help us analyze and understand how you use this website. These cookies will be stored in your browser only with your consent. You also have the option to opt-out of these cookies. But opting out of some of these cookies may affect your browsing experience.
Necessary Always Enabled
Necessary cookies are absolutely essential for the website to function properly. These cookies ensure basic functionalities and security features of the website, anonymously.
Functional
Functional cookies help to perform certain functionalities like sharing the content of the website on social media platforms, collect feedbacks, and other third-party features.
Performance
Performance cookies are used to understand and analyze the key performance indexes of the website which helps in delivering a better user experience for the visitors.
Analytics
Analytical cookies are used to understand how visitors interact with the website. These cookies help provide information on metrics the number of visitors, bounce rate, traffic source, etc.
Advertisement
Advertisement cookies are used to provide visitors with relevant ads and marketing campaigns. These cookies track visitors across websites and collect information to provide customized ads.
Others
Other uncategorized cookies are those that are being analyzed and have not been classified into a category as yet.
SAVE & ACCEPT